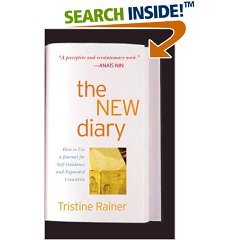 How to use a journal for self guidance and expanded creativity. Rainer's The New Diary. This is a book that will inspire even the most seasoned writer.
This classic which has sold over 200,000 copies, has been recently updated with a new preface.

"Diary Writing has become an increasingly popular activity. To answer a need for more knowledge about it I taught a course with my friend Tristine Rainer, who has been studying the diary for many years."
Anais Nin December 1976, Preface to The New Diary

Tristine Rainer Ph.D was a confident, friend and colleague of Anais. Rainer has been often quoted lately in articles on Anais Nin and Rupert Pole. Currently she can be reached through her Center for Autobiographical Studies

"Tristine Rainer, Ph.D, is a pioneer in the fields of contemporary journal writing and narrative autobiography. Her book The New Diary, how to use a journal for self-guidance and expanded creativity has sold over 200,000 copies and has been used as a text in university Psychology and Occupational Therapy courses, although her degree was in English Lit. After a quarter of a century in print The New Diary will see a new, revised edition in 2004. Her book Your Life as Story, Writing the New Autobiography, published in 1997 hit the Los Angeles Times bestseller list and is presently being used as a text in many college writing programs"
Posted by Letter at 5:39 PM No comments: