Just  recently downloaded this best summer read,when Thinking of Anais Nin colleague, editor and writer Valerie Harms sent me an email telling me it was out. I checked out Trintine Rainer's site: http://www.tristinerainer.com and found this terrific review of her newest book. I would have purchased the hardcover version, but am traveling, so sent the hardcover to a friend. 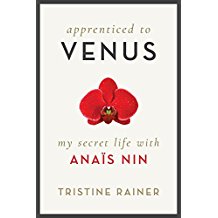 “Getting to know lust, love, and Anaïs Nin….In 1962, Rainer (Your Life as Story, 1997, etc.) met Cuban-born Nin, the noted diarist, while on an errand for her godmother…So begins her spicy and saucy hybrid of memoir and novel…. Over the next 15 years… she became a close friend and mentor to Rainer(and) Rainer became a devotee of Nin’s philosophy of life: “A woman has an equal right to pleasure as a man.”…Over time, she realized that Nin was a “deeply flawed person—a narcissist, a bigamist, a liar, and a deviant,” but she was also “so lovable.” Feminists and fans of Nin’s work will enjoy this unique insider’s portrait…”
—KIRKUS

We will be redesigning this blog, and when the new template that will match our sites theme  is redesigned and we become comfortable with Word Press, we wanted you to be able to enjoy "the best summer read"

By Tristine Rainer
NAMED A “BEST SUMMER READ” BY ELLE MAGAZINE AND SAN FRANCISCO CHRONICLE
In 1966, Anaïs Nin, author of the erotic bestseller Delta of Venus and Parisian lover to Henry Miller, published her intimate diaries and became a feminist icon of the sexual revolution, proclaiming:
“A woman has as much right to pleasure as a man!”
In reality, Nin was far from free, entrapped in a life of deception, married simultaneously to two husbands between whom she could not choose.
Tristine Rainer met Nin before her rise to fame. As an 18-year-old virgin from the San Fernando Valley, Rainer was sent on an errand to Anaïs’ Greenwich Village apartment and became entranced by the older woman’s world of sensuality and sophistication. She begged Anaïs’ guidance in becoming a woman, eventually following in her mentor’s footsteps of adventurous passion.
As Tristine is manipulated into running interference and spying to protect the secret of Anaïs’ bigamy, the danger and excitement of Anaïs’s life brings Tristine herself perilously close to the edge. A moving look at the intimacy—and risks—of the female mentor-protégé relationship, Apprenticed to Venus stories a deep friendship, for good or ill, with a pivotal historical figure.
Posted by Letter at 5:31 PM No comments: