New from Sky Blue Press foremost Nin scholar Benjamin Franklin V
has written the book book Anais Nin Character Dictionary and Index of Diary Excerpts
"Anaïs Nin Character Dictionary and Index to Diary Excerpts by Benjamin Franklin V is an alphabetical list of the name and description of every character Anaïs Nin used in her published fiction cross-referenced with the title(s) in which the character appears. Includes an index of persons, titles, and places included in every excerpt from Nin’s diary which has appeared elsewhere before publication in book form, including the remaining unpublished diary. A must for anyone studying Nin’s work, and a source of learning and fascination for even the most casual of readers
Franklin is the author of : Recollections of Anais Nin: By Her Contemporaries.
By clicking on this Look Inside Link you can access a recollection or two.
Posted by Letter at 1:00 PM No comments: 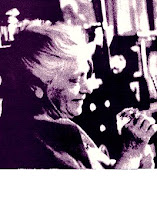 Valerie Harms sent us an article from the NY Times on the second day in January. It hasn't been posted until now as this writer has been in Guatemala.

NY REGION January 02, 2009 City Room: Gotham Book Mart Holdings Are Given to Penn By Sewell Chan The University of Pennsylvania Libraries are now home to about 200,000 items from New York's landmark Gotham Book Mart, which closed in 2007.

About 200,000 items from the Gotham Book Mart, which closed in 2007 after 87 years as a New York literary haven of international stature, have been donated to the University of Pennsylvania. 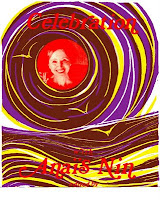 Readers of the Diaries will be familiar with Anais's descriptions of the Gotham Mart along with her friend, the amazing Frances Steloff who lived in an apartment above the store even after it was sold in 1967. She died in 1989 at the age of 101. The photo above is taken by Adele Aldridge who has this memory of Steloff on her web site
You can read Frances's reminiscences about Gotham in Celebration by Valerie Harms and Adele Aldridge which is on our site. You can also try to find an original copy on Abe.com. Listed in order of price, the last
book shown is signed by Nin and is $80.
Posted by Letter at 5:54 AM No comments: