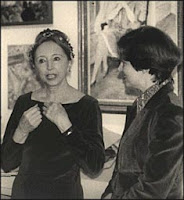 (picture of Valerie with Anais, cf Valerie's Memory on our Memories Page)

We owe premier Nin scholar Dr. Franklin and publisher Paul Herron a huge debt of gratitude for this book. Benjamin Franklin is Professor Emeritus of English at the University of South Carolina. The author of many books about American authors, plus jazz greats, and several books about Anais Nin, Professor Franklin now gives us an invaluable reference book.

I wish I’d had it when I was reading all of Nin’s diaries and fiction. Even though I tried to sort out characters myself, especially as I read Nin’s early stories and novel in Northwestern University’s Special Collections Department and eventually compiled Waste of Timelessness and Other Stories as a rare edition. But now the book is available for longterm fans of Nin’s work as well as newcomers.

The character dictionary scrupulously tells who is who and where they are written about. I was especially interested in frequent characters—e.g. Djuna, Jay, Lillith, Lillian, and Sabina. Surprising to me were the frequent references to God and on p.36 the reference for “Don Juan” as “man who hates Dona Juana.”

Part Two gives a list of all Nin’s published fiction as well as a list of the characters who appear in each work. Very helpful.

The final part of the book indexes the diary excerpts that were not indexed in the published Diary of Anais Nin. Thus, many of these come from volumes of the Anais: An International Journal. Here one can trace the references to Hugh Guiler, Otto Rank, and many others.

This book belongs in the personal library of all those who love Nin’s work and to university and public libraries around the world. This 162 page paperback costs $19.95. Order from your bookstore or visit http://www.skybluepress.com/.

Quotes from reviewers:
This book will help readers more easily understand the origin of the repetitions, continuities and discontinuities within Nin’s oeuvre and to distinguish the intentional from the accidental. – Tristine Rainier, Director, Center for Autobiographic Studies.

Once again, Benjamin Franklin V has meticulously explored the domain into which too few Nin scholars have entered: the domain of facts. His achievement is a major gift to Nin scholars and to the future of Nin criticism. – Philip K. Jason, author of Anais Nin and Her Critics.

Additional note: A Café in Space, The Anais Nin Literary Journal, Vol. 6, 2009, edited by Paul Herron, is also available from Sky Blue Press. This issue features excerpts from a newly found trove of letters from Anais’ father, Joaquin Nin y Castellanos, to Anais. It’s fascinating the material available on the Internet now. I recommend viewing the interview with the elderly Bebe Barron at www.youtube.com/user/TheStevenReigns.
Posted by Letter at 5:53 PM No comments: