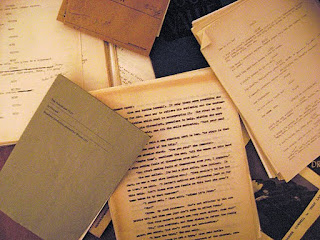 Yours Jimmy
Yours, Jimmy
Written 60 years ago and rediscovered on eBay, a young gay
man·s personal letters become fodder for a new opera..and includes letters from
Anais....
"Dear Jimmy:

Got your last long letter yesterday—be patient now—you'll be free soon. . . . [H]ow terrible it is that one cannot import one's experience—you will have to go through all your infernos. C'est triste. What is the good of gaining one's fulfillment if you have to watch those you love suffer from guilt and atonement? This is no religious language, though it sounds like it! Gore is happy in Rome—I am going to visit my favorite city, Fez—in Morocco—returning to NY in June.

The actual link is below.
Our site is in contact with David Kodeski who has graciously sent us copies of Anais's letters to Jimmy. Later we will be posting them after we find a volunteer to transcribe them. Apologies for the delay in posting the existence of this exciting new material we were hoping that perhaps more news about the opera would be forthcoming and we could ask for help from our readers in sending financial support to the Suitcase Opera Project

For half a century, a cardboard suitcase sits in storage, forgotten. A suitcase filled with letters sent across the continent from one young man to another.

Letters filled with questions about life, art, literature, and the making of self – letters filled with the struggles of what it means to be a young gay man rubbing elbows with the queer literary, theatrical and musical elite of the New York in the early 1950s. Vidal. Capote. Williams. Bernstein. Anger. Letters filled with vivid depictions of long-gone bars that catered to the queer clientele of pre-Stonewall Manhattan – from beery juke-joint pick-up bars to tony salons where the well-dressed and well to do camped and coupled.

A cardboard suitcase, filled with letters that pleaded, cajoled, complained, and questioned. Letters filled with family frustrations, descriptions of beauty, tales of sexual conquest, and pining for lost loves.

From Jimmy to Howard, nearly two dozen letters, from New York to California – from Marine barracks, boarding houses, hotels, and one-room apartments – depicting the life of a bright young man on the cusp of becoming a fully realized and complete person – struggling to become well-read, erudite, urbane – heard, seen, loved.

For half a century, a cardboard suitcase sits in storage forgotten until time and chance tumble together and this case of memory is auctioned off to the highest bidder; its contents unknown. And in the middle-west, at the start of a new millennium, the suitcase is opened and the letters live again.

With a history of devising stage works from found texts, writer/performer David Kodeski, composer Eric Reda and director Karen Yates collaborate for the first time on what will be an unforgettable journey into an undiscovered record of American gay liberation.

The actual Reader link to the original story is below.
http://www.chicagoreader.com/gyrobase/ebay-opera-gay-suitcase-discovery/Content?oid=3305770&mode=print
Posted by Letter at 9:27 AM No comments: