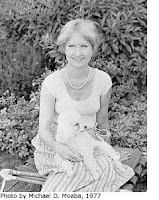 Sharon Spencer's birthday was August 8th. During this time to honor her August birthday we asked Rochelle Holt to send on these memories from the Memorial Booklet funded by the Anais Nin Estate.

Child of the sun, lover of whirling skirts, she longed to be a dancer, child of the wind. Harsh, the sun stills hot music, the bare dancing feet. It burns, tearing through to the center, and she must create or be consumed.

She lives on the brink. there is in her a fierceness, a love of red cotton dresses and sandals, an urge to bare breasts to sun. But at the moment of abandon comes another fury. Urgent, from deep in the body comes the need to shape. Language is her clay. She loves to work it until words round into one another, fluid as smoke, light as small bells ringing in the wind. Words come first on the pulse, on the heat of breath. Words dance in the blood like a woman among trees, and language is a song….

Rhombus, rebus, sphere, square. Sharon loves puzzles, patterns, and shapes. How does it work? How does it stand? How many sides has it, and what is the relation of one to another? With a builder’s love of space, she pursues the mystery of form, all the while forming herself….


SHARON, A SHAMAN
by Kazuko Sugisaki

Sharon was like white silk, folded into many layers, pure, delicate, lustrous, resilient,
comforting. Sharon was like black iron, firm, stable, strong, sustaining the foundation of many souls. Sharon was like blooming hydrangea, a cluster of small seven-colored flowers forming a perfect sphere, fragrant, abundant. Sharon IS like a Japanese Miko, a shaman woman, who walks freely over that red curved bridge, crossing the boundary between this world and the other, transcending time and space, transmitting messages, feelings, thoughts, unspoken yet understood, penetrating the impenetrable.

Sharon did not die. Sharon is not dead. Sharon simply decided to live…over there, in another part of the garden, across the red curved bridge, that part where ancient music sounding like miniature bells, like a lone bamboo flute, weaves through pine branches that bend and touch the mirror water, where a half moon floats sustaining the balance of day and night. Sharon decided to live there…because the purple mist of jacaranda is too thick here on our shore, she decided, knowing anytime, she can cross again that red curved bridge….

Mother of All, we are dying
of the old laws. Oh, Mother Moon,
give us we pray, a law to live by,
Come Quickly. Come. Come. Come.*

The third is by Rochelle Holt:


….We met face to face when Anais invited us with a few others to read with her at the U of California in Berkeley in ’72 which began a deep friendship that lasted thirty years. Sharon was the sister I always wanted and never had….


I admired and respected Sharon as a scholar, novelist, educator and critic. She became the major critic whose body of non-conventional criticism on Anais Nin remains the most in-depth and primary source available for the past two decades….


All who met or knew Sharon were drawn to her charismatic personality, her keen mind, her deep and genuine concern for all minorities….


Renate Druks in Sharon’s edited essay collection, Anais, Art & Artists in l986 included Anais’ credo, “A Celebration of Life” as part of her memorial tribute on Jan. 5 ’77. “Let’s celebrate the individual struggle to create a world of freedom, beauty and love.” That so fits my dearest friend, my sister, Sharon Spencer, a beautiful and independent writer, a woman who touched me and everyone who met her so deeply.

(Excerpts from the memorial magazine SHARON SPENCER edited by Rochelle Lynn Holt (Rose Shell Press ’77) and funded by the Anais Nin Estate. A few copies are still available for $8. each. Contact RochelleL317@copper.net)
Posted by Letter at 11:04 PM