"My dear friend, Tristine Rainer, a powerful an accomplished woman in her own right (see her website)  was Anais’ friend and protegee and their relationship left an indelible mark on Tristine. Often at lunch, Tristine will quote what Nin would have said or done in a given situation. Recently, I had asked Tristine to share the most important thing she learned from Nin, and she said “I learned that a crazy young woman in her twenties can become a joyful, wise woman in her sixties. It was her [Nin’s] belief that we can transform ourselves and our lives through self-creation. And that diary writing was a way." 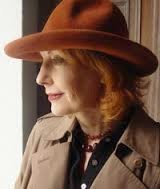 Rainer is the founder and the Director of the  Center for Autobiographic Studies. A pioneer in journal writing and narrative autobiography  Rainer co-taught a course with Anais and is the author of Your Life As Story and The New Diary . Both books are bibles for the memoir/journaling movement initiated from the famous and sometimes infamous Diaries. (visit the New Yorker's cartoon bank to see the witty Jack Ziegler cartoon on the subpoenaed diaries of Anais Nin).

Anais wrote the forward to Rainer's The New Diary. More on the Rainer-Nin connection can be found on the  Anais Nin Blog Sky Blue Press.

" A Diary means yes indeed"  A hearty shout out  of Yes Indeeds  to these two talented writers , fellow PhD's , friends and memoirists , Rainer and Raab who we met at the extraordinary Nin event held in Los Angeles last Saturday coordinated by West Hollywood's first poet laureate, Steven Reigns. More on the conference Anais Nin's Influence:Women Who Knew Nin. later when official photos are posted. Personal photos from the afternoon will be added in upcoming posts

To Order The New Diary with the Forward by Anais Nin

Picture your story here and order Your Life As Story
Posted by Letter at 8:17 AM